Infertility is not always a woman's problem. Both men and women contribute to infertility. Many couples struggle with infertility and seek help to become pregnant; however, it is often thought of as only a women’s condition.

Causes of infertility for men

Infertility in men can be caused by different factors and is typically evaluated by a semen analysis. A specialist will evaluate the number of sperm (concentration), motility (movement), and morphology (shape). A slightly abnormal semen analysis does not mean that a man is necessarily infertile. Instead, a semen analysis helps determine if and how male factors are contributing to infertility.

Conditions that can contribute to abnormal semen analyses include:

Infertility affects an estimated 15% of couples globally, amounting to 48.5 million couples.  Male infertility is a global population health concern. Males are found to be solely responsible for 20-30% of infertility cases and contribute to 50% of cases overall. 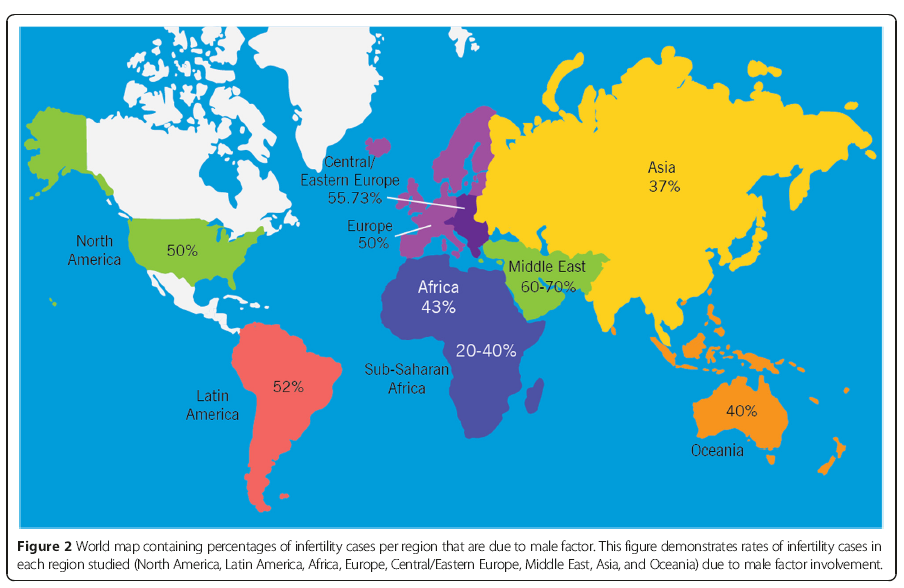 The study calculated data showed that the distribution of infertility due to male factor ranged from 20% to 70% and that the percentage of infertile men ranged from 2·5% to 12%. Infertility rates were highest in Central/Eastern Europe and Middle East. Additionally, according to a variety of sources, rates of male infertility in North America, Australia, and Central and Eastern Europe varied from 4 5-6%, 9%, and 8-12%, respectively

According to the study results, at least 30 million men worldwide are infertile with the highest rates in Eastern Europe and Middle East.

Affecting around 7% of male population around the globe in 2019, male infertility is a topic that shall be seriously taken into account by Government Bodies with appropriate communication according to Doctor Kalys. It is expected to be 7,2% in 2020.