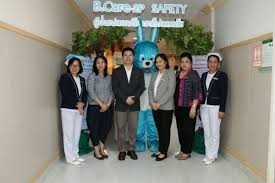 B Center was established in 1999, in the city of Bangkok, Thailand. The medical facility accommodates a one hundred and fifty bed capacity for inpatients, with examination rooms that can attend to two thousand outpatients daily and a 24 hours one-stop health center and specialized clinic. The medical center via cutting edge technology coupled with the most recent high-quality medical instruments and professional medical personnel for all specialties.

The hospital is comprised of 40 specialists and 400 nurses, with some staff who have over 20 years of experience working in the medical field. Languages spoken at the clinic are English and Thai. Among the staff are members of the Royal Thai College of Obstetricians and Gynecologists.

In 1999, B Center constructed its initial building, Somsaran Building, via the will power to enable medical services to be further extensively accessible to each and every individual. At that period, hospitals were not sufficient in the region. With more than 50 years of experience, the initiators of the hospital possess a very clear understanding of the relationship between doctors and patients, as well as the requirements, prospects and confidence of patients. As a result, they have brought together doctors with like-minds and instigated B.Care Hospital to efficiently provide support and services to the public in terms of medical expertise. Even though during that period Thailand was going through economic crisis, the initiators worked hard collectively to overcome numerous difficulties and complications up to the building was finished and the hospital was officially launched on 16 September 1999 on 8,000 metre square of land on Phahon Yothin Road. The hospital was privileged to have Her Royal Highness Princess Galyani Vadhana preside at the opening ceremony.

In the beginning, the hospital structure, Somsaran Building, was a 5 storey single structure accommodating a capacity of one hundred beds. The building’s interior and exterior were constructed based on medical and psychological exploration on patients and medical center, concentrating on facilitation and extreme value for its patients. The founders considerately supervised and witnessed the construction procedure from the initial phase to the final phase of the construction process. The hospital possesses a convenient home-like environment, somewhere patients can feel calm and at ease. With physical and mental enthusiasm of the founders, the medical facility was well acknowledged by the public, and with its instantaneous great accomplishment, the hospital extended it services continuously by speedily increasing numbers of patients and qualified medical personnel, which leads to the construction of the second structure, Panpiti Building, a six storey building with a 50 bed capacity. The building was brought to completion in 2007.
The standard service of the medical center is guaranteed, as B.Care Medical Center has constantly been certified by HA Hospital Reaccreditation Institution in Step 1 + 2 and is approved by HA-HPH standard in line with the Healthcare Accreditation Institute. As well, as from 2011 up to now, the medical center has similarly been approved by HPH Step 3.

Where to Find B Center Bangkok

No staff added by the clinic at this moment.